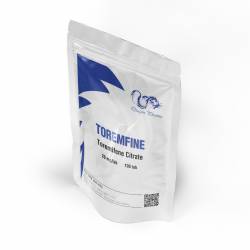 In bodybuilding, Toremifene Citrate is used by men as a drug for post-cycle therapy (PCT) to counteract and/or block some of the effects of excessive estradiol in the body obtained through aromatization of various androgens used. Toremifene is used particularly to restore levels of endogenous testosterone in blood, as well as to prevent the estrogen-related side effect of gynecomastia.

Toremifene stimulates the hypothalamus which in turn stimulates the anterior pituitary gland to release gonadotrophic hormones. The gonadotrophic hormones are the follicle stimulating hormone (FSH) and luteinizing hormone (LH). FSH stimulates (in males) the spermatogenesis and LH stimulates the leydig cells of testicles to secrete more testosterone. This feedback mechanism is known as the hypothalamic-pituitary-testes axis (HPTA). This results in an increase of the body's own testosterone production causing blood levels to rise, as to compensate for the diminishing levels of exogenous steroids. This is vital to minimize post cycle muscle losses.

As for its antiestrogenic activity, it shall be noted that Toremifene Citrate, being a SERM, is a true estrogen blocker as compared to aromatase inhibitors. Toremifene Citrate blocks the activity of estradiol at its target receptor sites in different tissues, and it does this by binding more strongly to the estradiol receptors in these tissues than estradiol itself, effectively taking the spot that estradiol normally would. Toremifene binds to the receptor site and remains inert (does not activate the receptors). This results in the inability of estradiol to bind to these receptors, as they have already been occupied by toremifene.

Toremifene does not lower overall circulating blood plasma levels of estradiol in the body, it merely blocks its activity in certain tissues. This is the main difference between aromatase inhibitors and Toremifene. AI’s bind to the aromatase enzyme responsible for the conversion of androgens into estradiol (aromatization), and reduce the total circulating levels of estradiol in the body by doing so.

In its chemical structure, toremifene is very similar to tamoxifen. However, toremifene is a new generation drug and has less toxic side effects than Tamoxifen. At the same time, there are some negative aspects and properties to toremifene as well. Firstly, and perhaps most importantly, is the negative effect on SHBG (Sex Hormone Binding Globulin) levels in the body, where clinical research has demonstrated that while toremifene can and does stimulate natural endogenous production of testosterone, it in fact raises SHBG levels in blood. For this reason, Toremifene may decrease the cycle efficiency when taken within a cycle as a drug to combat gynecomastia symptoms.

Also, in regards to the restoration of HPTA and endogenous testosterone production in males it has been determined that Toremifene is not as potent as Tamoxifen in equal dose. Studies have demonstrated that Toremifene, when administered at doses of 60 mg daily, raised testosterone levels in test subjects by 42%. This is a significant increase, but is lower when compared to a standard 20 mg daily dose of Tamoxifen in the same study, which increased testosterone levels by 71%.

Therefore, Toremifene dosage, for a more effective boost in testosterone production, should be in the range of up to 120 mg per day. This dose can be maintained for a first week of PCT, 100 mg/day for the second week of PCT, and then 60 mg/day for the remaining 3 – 4 weeks of PCT. Of course, exact dosages shall be determined individually based on blood work results.